On Saturday we visited an aquarium in Kenting area, Taiwan. We heard nice stories about the place from our Taiwanese friends so we decided to give it a try. We loved zoo in Taipei and hoped that we would fall in love with this aquarium as well. Kenting Aquarium (officially National Museum of Marine Biology and Aquarium) is one of the biggest aquariums in Asia and a home to some very interesting species. It has several massive tanks hosting rays, sharks and even a beluga whale. Filled with aquatic animals and discovering zones for hands-on learning, can be an amazing place to spend a nice and educational day (we spend only an afternoon and that’s way too little!).

It’s definitely an interesting place, especially that we were able to see some new animals we’ve never seen before, including some bizarre pufferfishes which gave me a shiver down the spine! Also, the massive tanks and underwater tunnels are simply amazing! But it left me with mixed feelings about the conditions in which some animals are kept. It provided us with a sad opportunity to talk to Rascals about animals’ welfare.

We arrived quite late, so we didn’t have enough time to slowly explore all of the parts we would like to but nevertheless we spent a really nice and exciting afternoon.

Before I start I just want to let you know that my camera is broken and the photos are of low quality. But the animals on them are still amazing and worth a look!

The Waters of Taiwan part shows the island’s aquatic life of both rivers and surroundings seas. There are plenty of river fishes to see, a small coral reef aquarium, some funny mudskippers, oyster farming exhibit and a small “touch pool” (yes, you read correctly!), where adults and children can touch (!) some of the sea animals (we saw sea urchins and cucumbers, but there seem to be sometimes also sea stars, crabs, and sea hares). 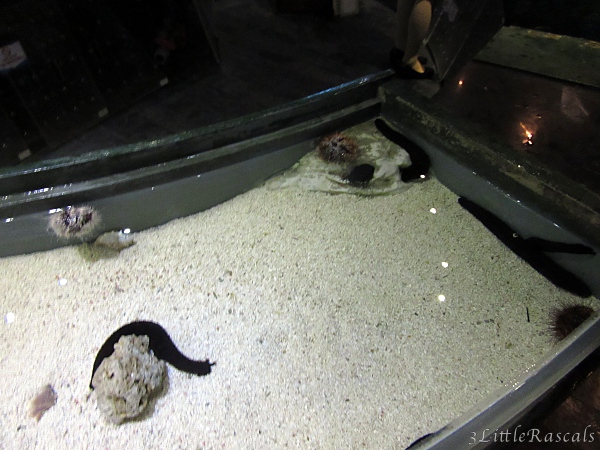 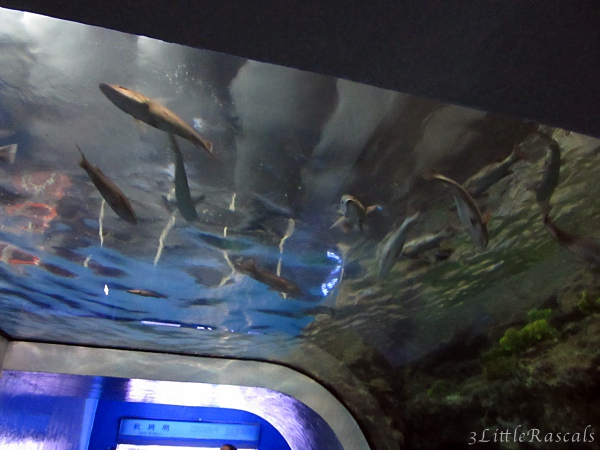 There is also a huge aquarium full of manta rays, guitarfishes, hammerhead sharks and other. For several years it actually held even whale sharks, but the last one was released into the ocean three years ago. 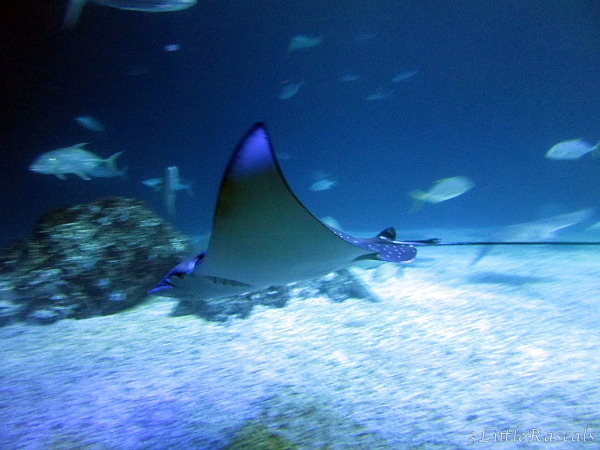 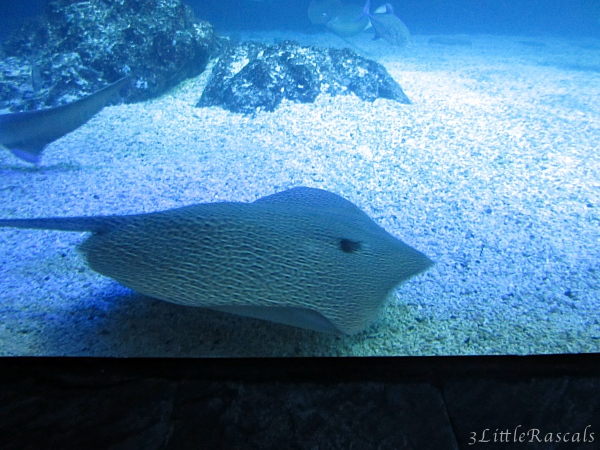 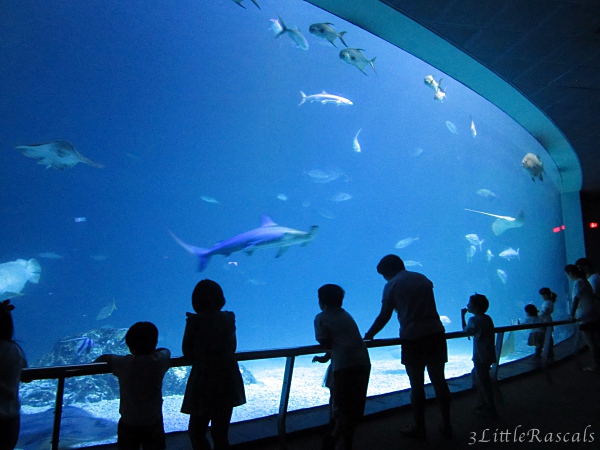 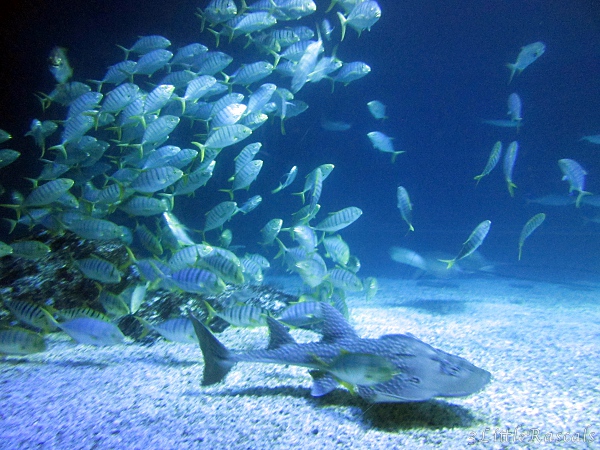 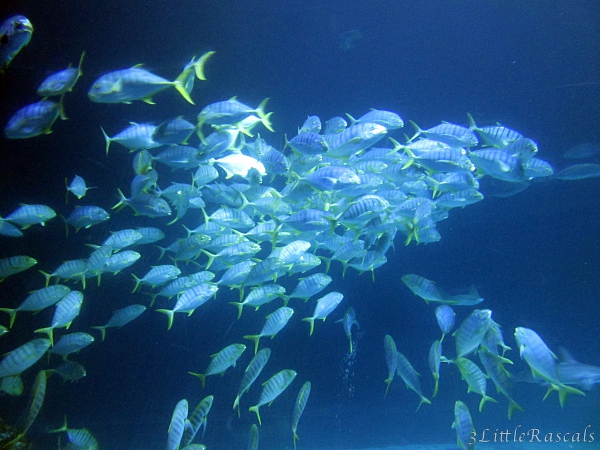 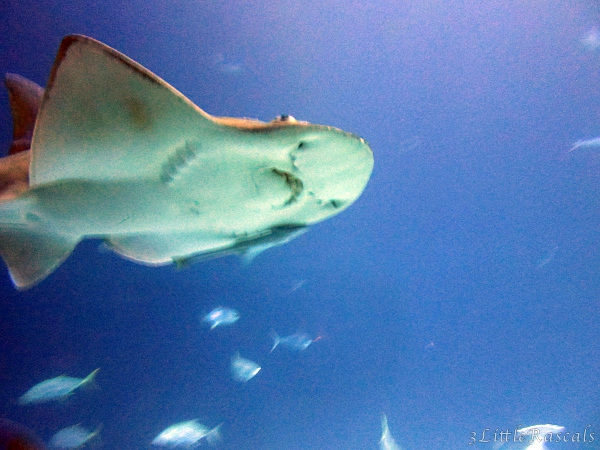 Notice the little fish underneath cleaning the guitarfish

The Coral Kingdom is actually one of the best exhibitions on coral reefs I have seen so far. It consists of plenty of mid-size, big and massive tanks (not those teeny tiny “Daddy, looks, there’s Nemo” type) and underwater tunnels (more than 80m long!). It has also an interesting area called “sank ship” showing the schools of fishes living around the shipwreck. First, we see the ship, then we “enter” it – part of an exhibition is located in areas looking like a shipwreck. 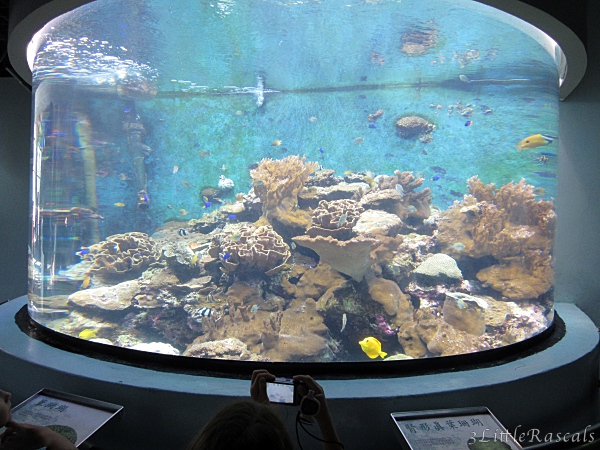 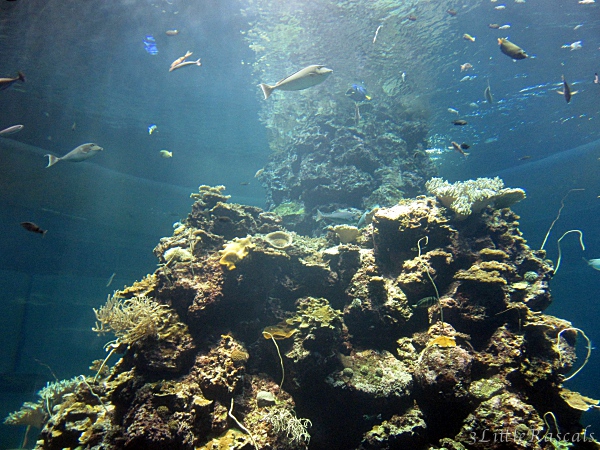 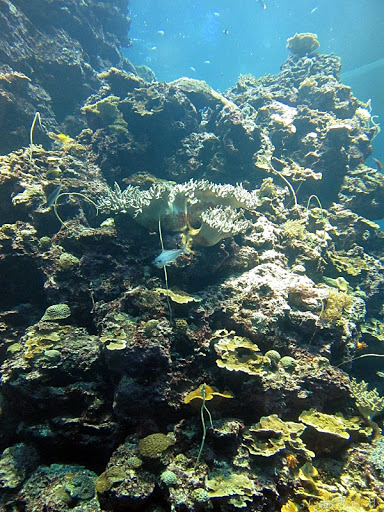 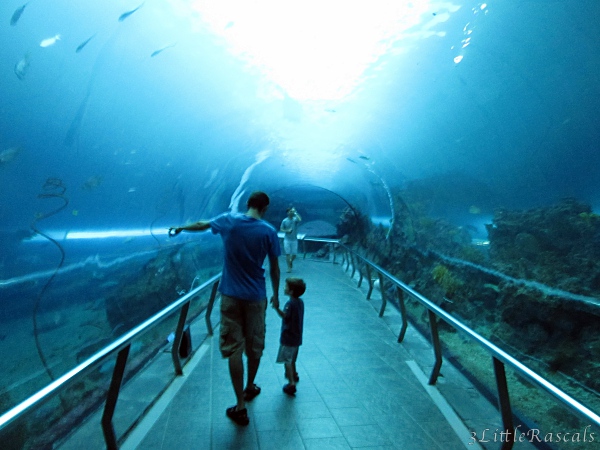 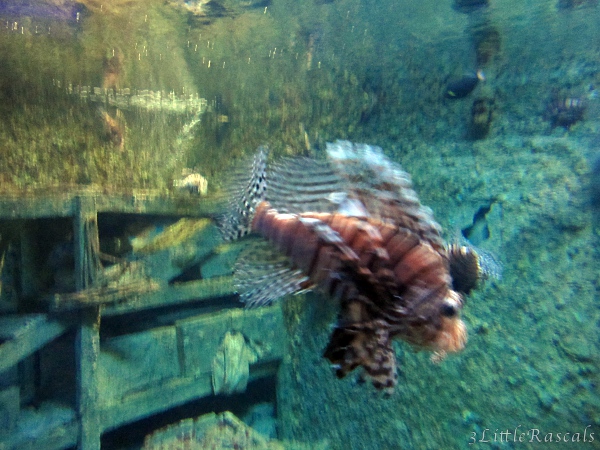 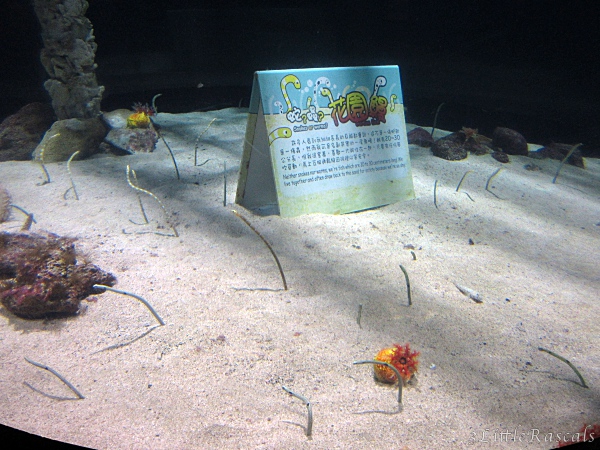 At the end of the coral exhibit, there’s a very interesting educational area on marine mammals and their adaptation to living in the sea. There is also a massive tank with a beluga whale, the cutest thing ever! We were very lucky because she (he?) came to us the moment we entered the zone and (s)he looked so interested in us, trying to reach us (you could see how (s)he was leaning on the glass). We obviously fell in love with her (him?) immediately!

And it was kind of sad experience too, as the whale definitely didn’t look happy in its tank. 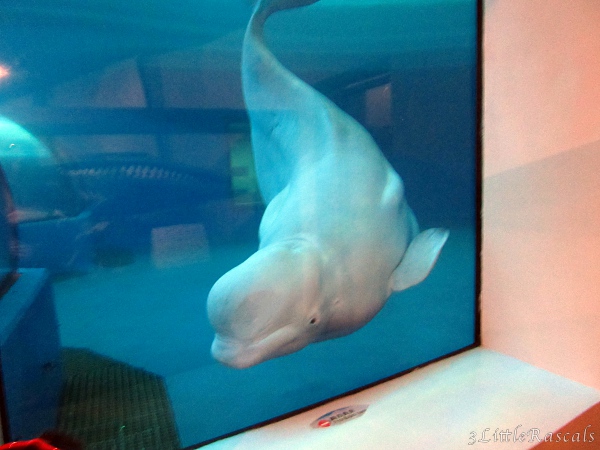 There is also the upper deck observation pavilion, where you can see beluga coming to the surface to breathe, but we didn’t go there as we were getting short on time.

Ancient Oceans exhibit shows the creation of the oceans and evolution of marine life. It consists of different tanks, 3d static and motion pictures, and huge animal models.

The Kelp Forest is shown in a tall tank spreading between 3 levels.

The Deep Sea part, the one we had the biggest interest in, turned out to be quite disappointing. Before our travel we covered the subject of the deep sea and N was especially interested in this area. But the exhibition was mostly created of motion pictures showing all those weird creatures. It looked very unnatural since all the animals were swimming together making it difficult to really get the feeling of ocean depths. There was also an introductory movie played at the beginning, but it was in Chinese and S was scared of what will happen (the room was totally dark) so we skipped it.

The Polar Seas part was nice, with huge tanks with penguins and puffins. I really like puffins and it was the first time I saw them in real, so it was pretty exciting. Rascals were running “with penguins”, there and back along the tank, having a really good time.

In this part, there was also an interesting exhibition on sharks. Here we would definitely like to spend more time but it was getting late and Rascals wanted still to play in the fountain.

One of our favourite parts was a huge fountain with life-size figures of whales where kids (and adults too!) could play and refresh themselves. Playing in fountains seems to be a national sport of Taiwan and we definitely love it! Rascals spent at least half an hour in the water and they wouldn’t mind staying there for 2 more hours, but the place was closing. If you ever visit the aquarium, make sure you take swim suits for kids or spare clothes, they won’t be able to resist! 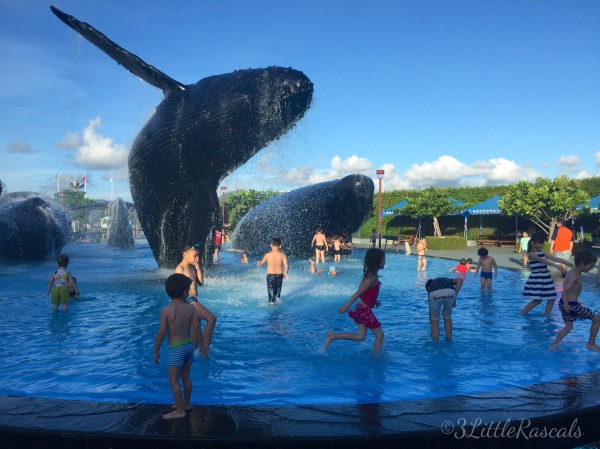 There is one more fountain-pool, on our visit it wasn’t in use but I imagine during the summer season it’ll be open as well. This one has some fish figures including a whale shark! Oh N wanted so much to play there too!

There is, however, the downside of the visit which left me with very mixed feelings about the whole place. There were at least three places where I felt like “but this is terribly wrong”. I know for some people zoos and aquariums are “terribly wrong” in general but I’m not there yet.

So my first bad impression was at the very beginning of our visit, in a restaurant called Shark Bite Toasts where we had our lunch (by the way I wouldn’t recommend the place!). Inside the restaurant, there’s a small tank with two sharks in it. I felt sorry for these sharks the moment I saw them. Their tank is small and the place has full lights on for most of the day. I’m not a shark expert, but it looked pretty weird as one of the sharks was lying on the bottom of the tank for most of the time.

Second place – the touch pool. I know interaction with animals is cute and important but please, not this way, not with these species, not so without any control whatsoever! There are hundreds of people a day touching those poor creatures. Some of them behaving with no respect towards animals at all. I’ve seen an adult man who found a joy in putting gravel ON the cucumber!

“For animals good” the touch pool is opened only 3 times a day, but personally I don’t like the idea at all and I explained to Rascals why we wouldn’t touch these animals.

And last but not least, that poor beluga whale. It seemed a bit entertained when Rascals came to it, but then lost interest as more and more people kept coming and as (s)he couldn’t reach them. Apart from this short moment, it spent most of the time trying to move a grating on top of  the tank. A truly sad image.

I saw also a movie showing the beluga’s performance, but I don’t know if it’s still held and how does it look like.

Belugas are very intelligent and social arctic animals living in pods counting from few to even more than a hundred whales. I really cannot see one good reason for keeping this whale closed, alone and in a tropical (!) country. 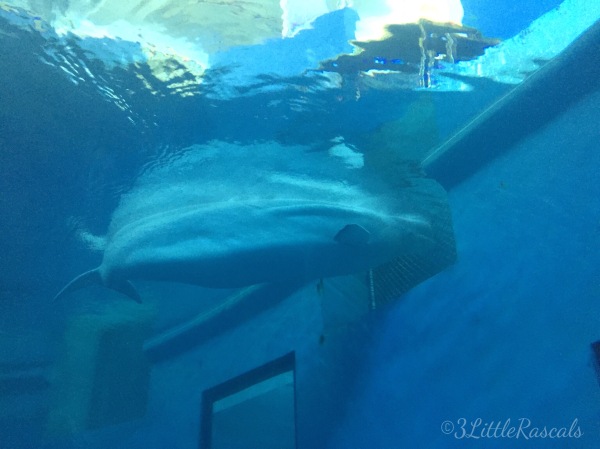 * entrance fees as of June 2016: 450nt$ adults, 250nt$ children over 6y, children under 6y and children lower than 115cm enter for free (you might want to have an ID for children just in case, we didn’t have to show any but there is an information on the web that it is required)

* there are several “shows” throughout the day, mostly feeding time, the schedule available on the web page

One thought on “Kenting Aquarium (Taiwan)”